Canada has established itself as a mining juggernaut with one of the biggest mining industries in the world. The North American country is well endowed with rich mineral and metal deposits and is currently among the five leading metal and mineral producers in the world.

Canada produces more than 60 metals as well as minerals. It is the leading potash producer in the world and the second largest producer of niobium and uranium. It is also rich with metals such as cobalt, platinum, nickel, and aluminum among others. To top it off, Canada also mines gold and diamonds.

Meanwhile, the mineral industry added roughly $72 billion CAD to the GDP of Canada in 2017 which indicates significant growth from the previous year. Below are some of the minerals that were mined in Canada in 2017 and their values.

Canada’s mining industry also offers the highest salaries and wages out of all the industries in Canada. It is also one of the country’s industries that offer a large number of jobs. There were roughly 403,000 individuals employed directly by the Canadian mining industry while another 193,000 were employed indirectly. It has therefore contributed positively to improving the livelihoods of many Canadians.

The S&P Global Market Intelligence revealed that Canada generated more revenue from the mining of non-ferrous minerals in 2017 than any other country. Canada accounted for $1.1 billion or $1.1 billion of the total global mining expenditure. This means that it managed to beat Australia to the global top spot since the land down under is also a mining powerhouse.

Canada also exports the metals and minerals from its mining sector to other countries including European Union countries which are its largest customers for diamonds, nickel, iron ore, and gold. China is also a large market for Canadian copper, potash, coal and iron ore.

Canada’s mining industry has for a long time benefited from organic growth which means that increasing market demand for metals and minerals has been the main factor behind growth. However, the industry has lately been going through some changes and of course, change causes concerns of how things will be affected. Nevertheless, industry experts believe that the mining sector will remain bullish.

New technologies and innovation have been rapidly changing the mining sector leading to positive and also negative effects. For example, the implementation of more complex technologies has generated concerns about the impact on the environment and also on society. On the flip side, innovation and technology make the mining process more effective and even speed up processing, thus increasing productivity.

One of the benefits of new technology as a growth driver is reduced costs. Another growth driver is the industry consolidation as mining companies in Canada pursue mergers. The reason for this trend is to achieve more synergies and also lower the cost of operations.

KPMG Canada’s natural resources and energy partner Heather Cheeseman believes that Canada’s mining industry is currently at the intersection of new technology and social expectations. Cheeseman, however, noted that the industry will always be driven by organic growth. She, however, believes that mergers and acquisitions will play a significant role in industry expansion.

There have also been worries that innovation and technology advancements will end up negatively affecting the industry but most observers believe that it will bring more opportunities. Advancements in technology are usually accompanied by automation and subsequently, lead to the loss of jobs and thus the concerns about such a fate for mining industry jobs.

As noted earlier, one of the major concerns in the industry is the social and environmental risk associated with mining activities. Such processes are known to release mine waste which at times poses a threat to the society. The mining industry is one of the industries with the highest level of concern for health and safety. Fortunately, Canada’s mining industry has invested heavily to bring those concerns to a minimum. Mining firms in the country enforce safety measures designed to protect the workers and every mine is equipped with safety trainers to impart workplace safety knowledge to workers.

There are the TSM Energy Use and GHG Emissions Management Protocol that mining companies have to adhere to as part of the HG emissions regulations. Mining firms are also supposed to provide training on energy awareness. They are also required to have the necessary systems that aid in keeping track of greenhouse gas emissions data. 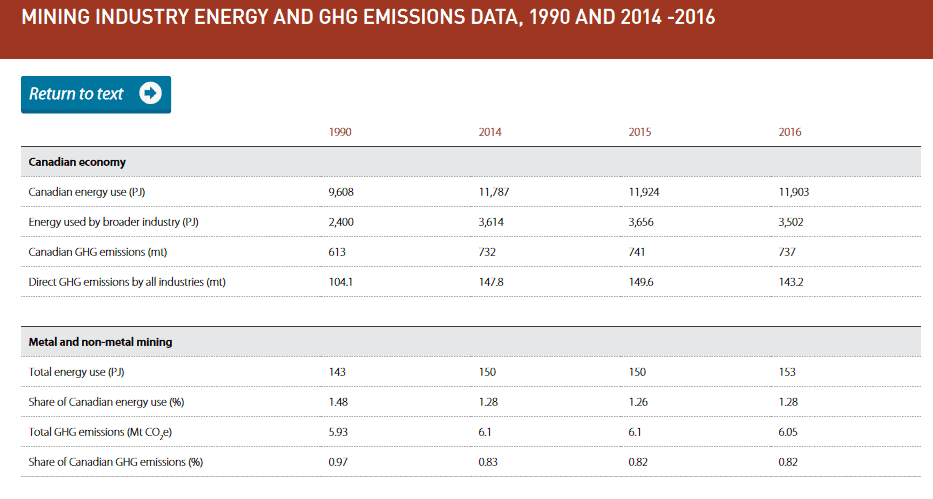 Canada’s mining industry is among the oldest mining industries in the world. Although they have been very productive and continue to be, this productivity will not last forever. However, the country is still rich with metal and mineral deposits and so depletion is not something that is expected to happen anytime soon.

Change is however happening and there will be a definite impact for future generations. A large population of the Canadian people that currently work in the mining sector will retire in the next 10 years. The Human Resources Council (MiHR) estimates that 87,830mining industry workers will retire during that period. This is in line with the adoption of technology especially in the automation of some of the processes. Does this mean that future generations will not have as many opportunities? Not necessarily because technology also brings new job opportunities with it and this is also expected to happen in the mining industry.

Some Canadian mining companies not only have mining operations but they have also invested in mining activities in other regions across the globe. In fact, Canadian mining firms collectively run operations in more than 100 countries.

According to the CMAA, roughly 651 Canadian firms own mining assets beyond Canada’s borders and the estimated worth of those assets in 2016 was $164 billion. These assets are more than double the value of the mining assets within Canada. Some of the countries where Canadian mining firms have assets include South Africa, the Democratic Republic of Congo, Mali, Peru, Chile, and Panama.

The mining industry’s value to other industries in Canada

Canada’s large mining industry has also benefited other industries in the country. For example, the industry has attracted more foreign investment which has, in turn, contributed further to the country’s GDP. Foreign investment allows Canadian businesses to secure easier access to new technologies and possibly come up with better ideas. It also opens doors for businesses to access foreign markets, thus allowing them to unlock more value through more sales.

The industry has also generated wealth for local communities which has also benefited other industries such as the construction industry as demand for high-quality housing. Many other industries in the country benefit from this kind of trickle-down value.

A Focus On The Canada Mining Industry